Seeing 500+ meetups changed what many people 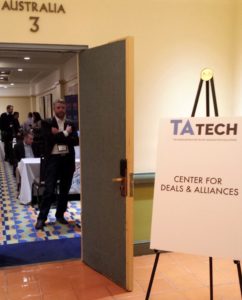 TAtech Center for Deals & Alliances – opened early & got a rush of deal seekers going after the (early bird gets the) worm!

(If you missed the pre-conference blog, get it here)

Orlando, FL – April 2016
TAtech was roaring hours before it even started, thanks to savvy delegates who made their own luck by pre-scheduling 1:1 meetings in the TAtech Center for Deals & Alliances (CDA) before the main conference even started! With all this action right next to the registration desk, it was like a big magnet pulling people in by the dozens.

Chris Russell, long time industry guru, posted in his popular blog “The alliances room was popular because let’s face it, we all just want to network. Hope that continues next year … Being able to see who is coming is a must have for any conference in my opinion.”

This mid-April weekend ‘industry’ event was only for vendors, which made it very unique and complimented the SHRM Talent Expo which followed TAtech in the same Disney World hotel Monday and Tuesday.

The JobBoardDoctor, Jeff Dickey-Chasin, secured table #1 by being one of the first to book his meetups

Top experts in the field were back this year, including Jeff Dickey-Chasins [JobBoardDoctor] who exclaimed the CDA as “One big change” describing it in his blog post – “Picture a long room with tables on either side and lots of intent conversations, gesturing, and note scribbling. I’m sure deals were made. I used the room to learn about products…”

Jeff was not alone, at least two-thirds of the delegates took part in the 500+ meetings and leveraged our custom designed scheduling tool to arrange up to 30 twenty-minute meetups to connect with potential new business partners or to simply ensure they would not miss key contacts.

The networking ‘Genie’ was released and granting wishes according to Adam Berkowitz, Product Manager for Digital Media Solutions, who told his boss he had 15 meetings scheduled before he even left for Orlando, which prompted a big smile from his boss. He told us he didn’t attend a single educational session and was constantly in CDA meetings. Amazingly 70% of his meetups were with people with whom he already had relationships, and only 1 of the 15 meetings didn’t produce value. Clearly Adam had the Genie on his side!

Where was HR Tech Advisor during all this action?
Larry and I were providing ‘Concierge Services’ by supporting the delegates with personalized recommendations, warm introductions, vetting support, facilitating appointments and even supplying the sponsors with a screwdriver and an HDMI cable so they could showcase their solutions. 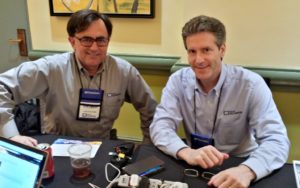 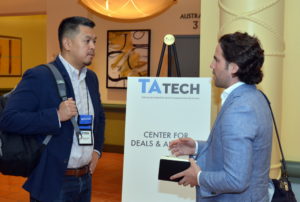 Networking was everywhere, even outside the popular CDA

Worst part of our job was kicking people out of the CDA room when it was closed for keynotes etc. – at least a third stood outside the room chatting away like it was their last chance to network.

Pent up demand? Yeah, no doubt the Genie has been bottled up for too long! 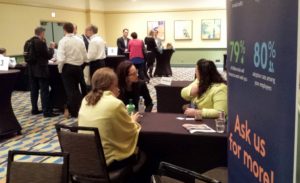 Amanda Cole @eTeki “It was unbelievable how many meetings we could arrange considering it was our first time to TAtech – the Center for Deals and Alliances really helped us get us in the front of the right people and being a sponsor gave us a huge branding ROI – we’re hooked!”

Of the almost 200 industry execs who attended the show, many provided some great feedback; here are some highlights: 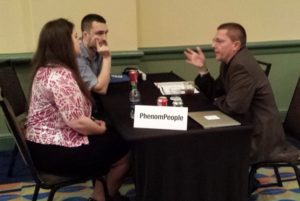 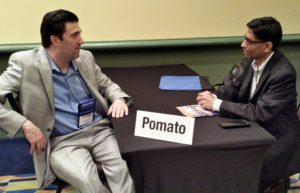 First time to TAtech, Pomato CEO Suresh Parakoti says “it was a fantastic event and am thrilled with the opportunities I discovered”

It takes good partnering to create the success witnessed in Orlando for the first year of a new program. Peter and Pete, the Association executives running the Congress, are naturally tuned to being great partners and nothing was left to ‘chance’ to be sure the delegates had a top notch experience. To help the attendees could prepare for the event, together we delivered several pre-conference webinars as crash courses to ensure the delegates optimized their ROI. Peter showcased what the first three content tracks had to offer, then we helped them create their unique partnering propositions and elevator pitches, to ensure top results for their meetups. We also gave a few ‘demos’ of the scheduling system and how to make the most of it. Lastly, we served up the Top 10 things you should and shouldn’t do at the conference (to ensure partnering success) and tips on how to determine with which companies would be best to explore partnering.

The fourth track was run in partnership between HR Tech Advisor and The Association for Talent Acquisition Solutions (TAtech), and was a first for the TA Tech industry.

Peter Weddle, CEO for TAtech who runs the TAtech Industry Congress, is thrilled with the new partnership. As a long time veteran of the industry, Peter shares his thoughts – “TAtech: The Association for Talent Acquisition Solutions has served TA technology companies for almost ten years. That’s been the association’s sole mission and total focus. The TAtech Center for Deals & Alliances expanded on that commitment by providing a one-of-a-kind venue specifically designed to advance the bottom line of any organization with a talent acquisition product or service.”

Larry Cummings, Chief Connector and co-founder of HRTechAlliances.com shared “From my experience, TAtech has always been the place to nurture vendor-vendor opportunities. Now that they’ve added a 4th track, it has helped attendees go deeper to maximize their networking success. The new Center for Deals & Alliances completely flipped the dynamics of the event from chance meetings to meetings that improve your chances.”

HR Tech Advisor has been working with numerous industry experts affiliated with HRTechAlliances.com – we are on a mission to lower the partnership failure rate in our industry which is greatly caused by poor planning and lack of useful information before industry events.

One of the partners in this endeavor is ASAP (Association of Strategic Alliance Professionals), led by president and CEO Mike Leonetti, CSAP, who shared “this was a great event for alliance professionals looking to learn and grow in the HR Tech community. We’re proud of our certification programs and the professional credibility and results it brings not only to the individual, but also to the alliance teams within our member companies. Our partnership with HR Tech Advisor is helping to educate the vendors and the HR departments that there is a group committed to their success.”

The top 20 delegates collectively had over 300 pre-scheduled meetings! 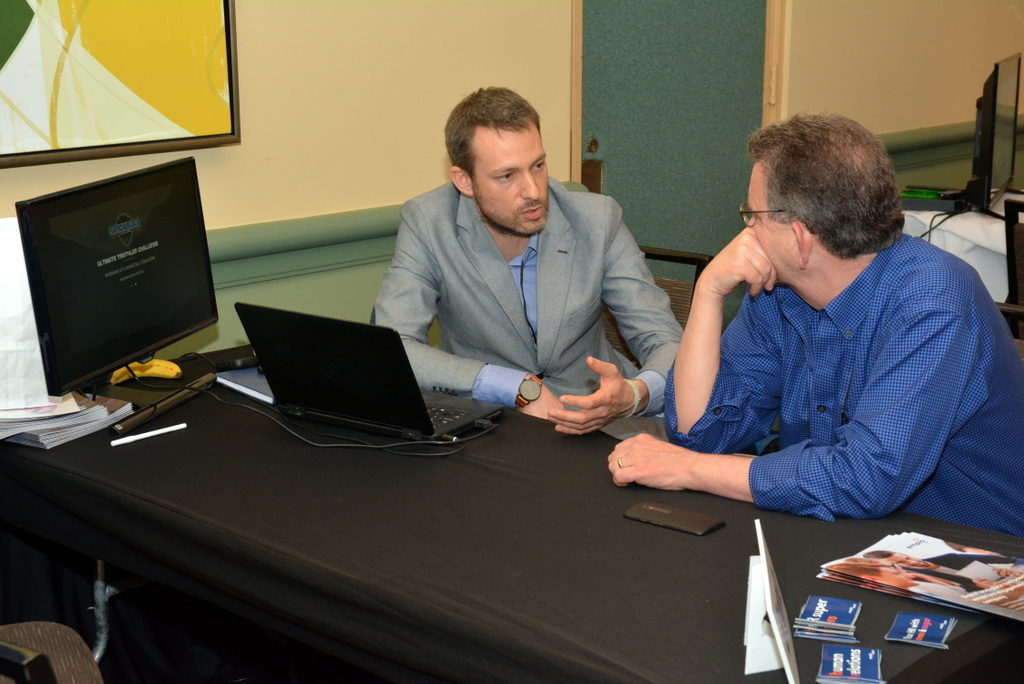 Leaders of the pack:

Overall there were at least 500 meetings that occurred during the two day event.

The post-event survey by TAtech found out what delegates really thought about the TAtech Center for Deals & Alliances: 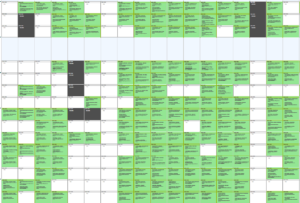 A bird’s-eye view on a small portion of the ‘Pitch & Match’ master schedule of pre-scheduled meetings; holes were quickly filled by impromptu meetups

Considering most didn’t know what to really expect, next year is going to be an even bigger smashing success! 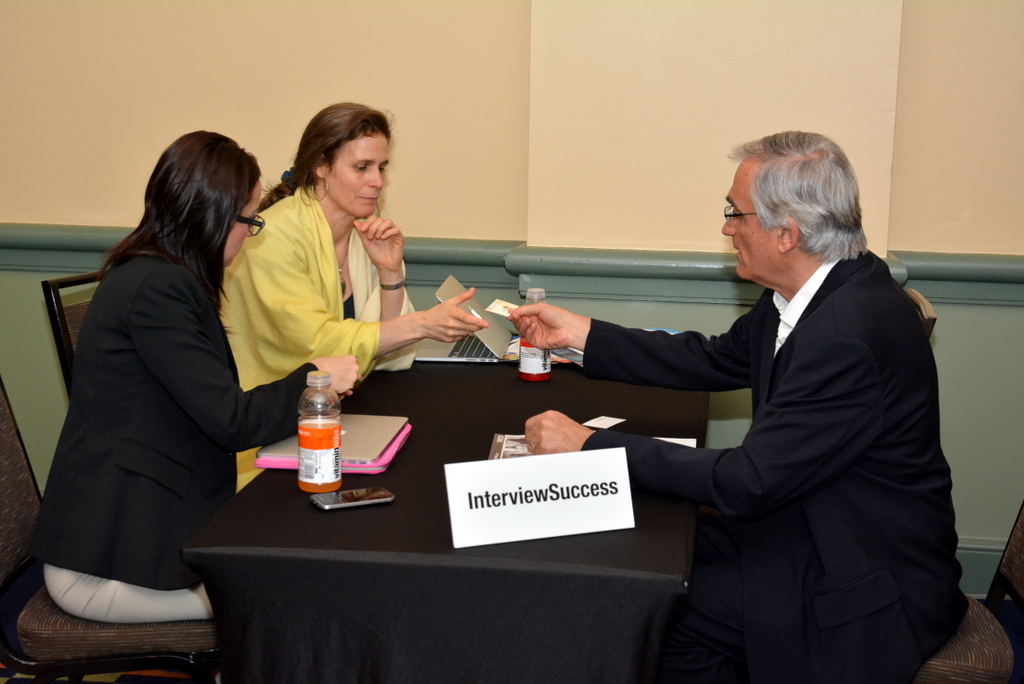 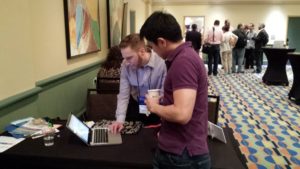 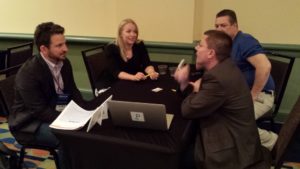 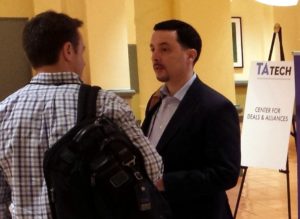 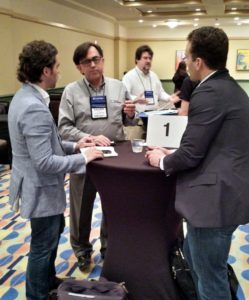 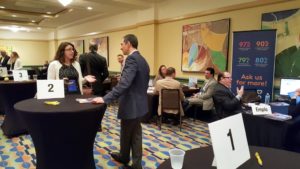 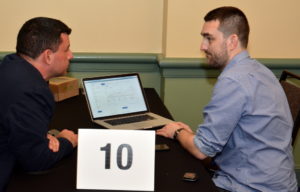 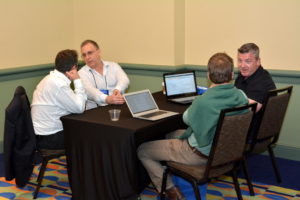 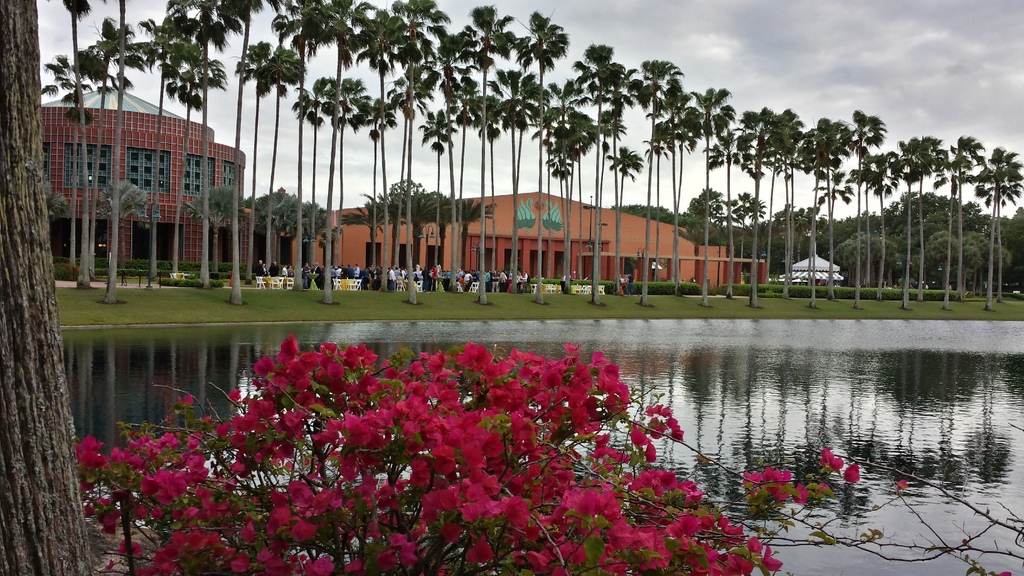 Day One AFter Party – mostly mix and mingle, and some ducks! 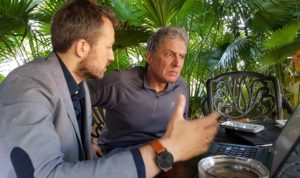 Jan Antoniewicz @Emplocom still pitching even after TAtech is over! “We arranged 30 meetings in advance and had at least 50 during the conference!”

Each day had a happy hour after party, both times held outside at the Swan hotel. The first day it threatened to sprinkle, but on day two the sun came out just in time for the reception! 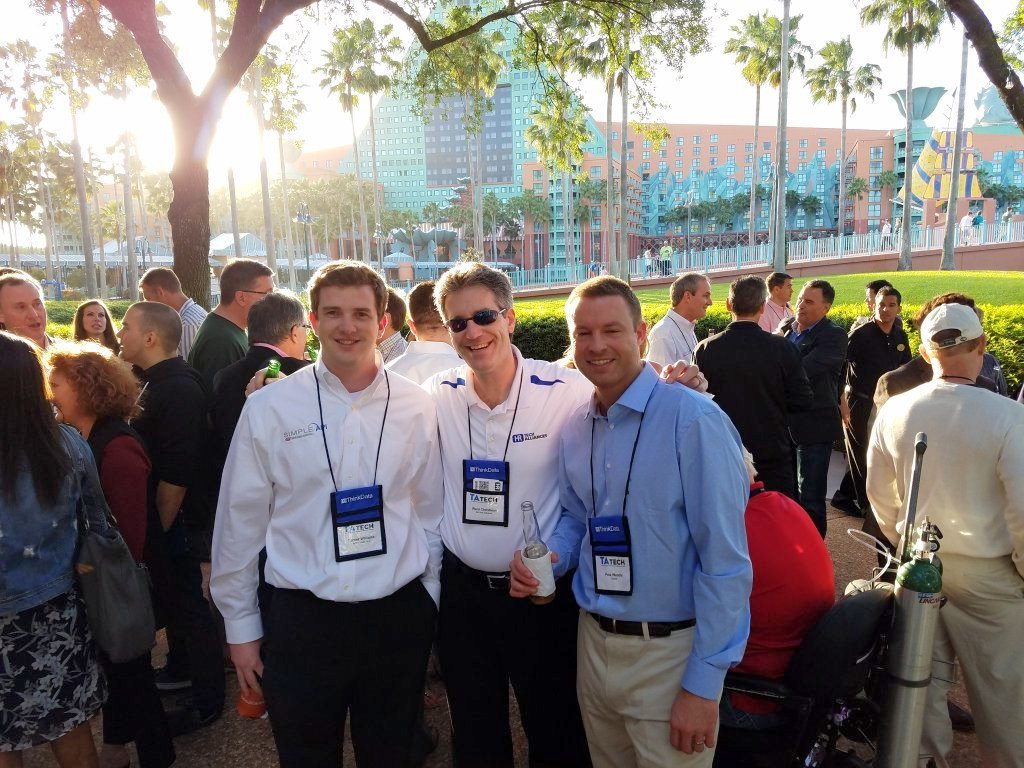 For HR Tech companies in Talent Acquisition who are looking to grow their business via partnerships and alliances, be sure to get in on the action at the upcoming TAtech Conference in Las Vegas to avoid missing out on partnership deals – this is going to be one amazing event you won’t want to miss!